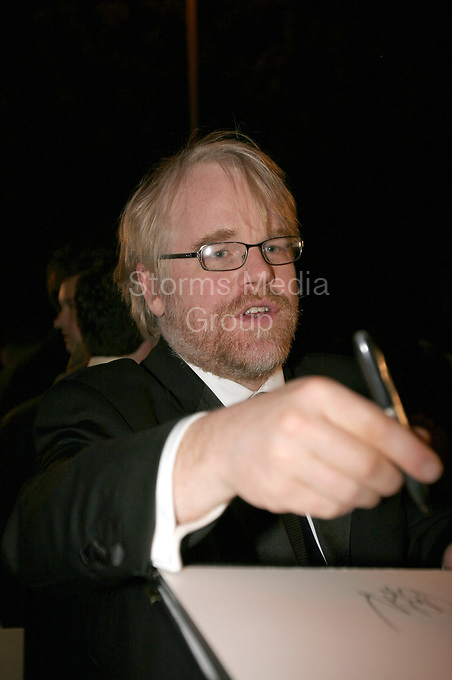 NNEW YORK, NY - FEBRUARY 02: ( NY Post ) Oscar-winning actor Philip Seymour Hoffman ( (born July 23, 1967) was found dead of an apparent drug overdose — with a hypodermic needle still stuck in his arm — inside a Greenwich Village apartment on Sunday, cops said.
A personal assistant found Hoffman in his underwear on a bathroom floor at 35 Bethune St. and called 911 around 11:30 a.m., sources said. Cops found heroin inside the apartment, where Hoffman has been living recently, sources said. “He was shooting up in the bathroom,” a law-enforcement source said.
The building is less than three blocks from the three-bedroom, 2-1/2-bath apartment on Jane Street that Hoffman, 46, and longtime girlfriend Mimi O’Donnell, a costume designer, bought for $4.4 million in 2008. The couple have three children together.
In 2006, Hoffman publicly admitted that he nearly succumbed to substance abuse after graduating from NYU’s drama school, but got sober in rehab. “It was all that (drugs and alcohol), yeah. It was anything I could get my hands on….I liked it all,” he told “60 Minutes” at the time. Last year, Hoffman reportedly checked himself into rehab again for 10 days after relapsing in 2012.
TMZ said he began using prescription pills, then snorted heroin for about a week before realizing he needed help. Witnesses said Hoffman appeared “slightly disheveled and pasty” last month during a party for his movie “God’s Pocket” at the Sundance Film Fesival in Park City, Utah. He initially declined interviews while co-stars Christina Hendricks and John Slattery talked to the media, with his reps telling reporters, “He needed a minute and didn’t feel like coming down yet.” Later, he seemed more relaxed and agreed to do some interviews but would only talk about the movie, before being spotted at another party chatting to Sam Rockwell.
Hoffman had been sho
Storms Media Group is a News Agency specializing in late breaking celebrity News & Images. ©Storms Media Group Inc. All Rights Reserved