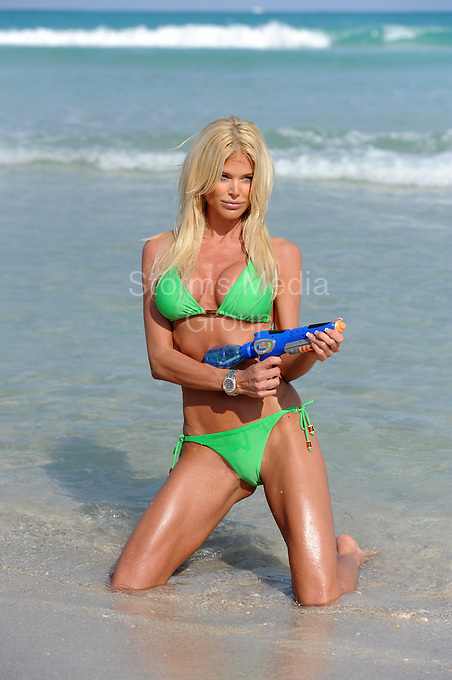 MIAMI BEACH, FL-MARCH 19: (EXCLUSIVE COVERAGE) Victoria Silvstedt cares about the environment as she goes "ALL GREEN" in a sexy Bikini on Miami Beach. She enjoyed a day with her friends , playing football,tennis and tanning, at one point she even grabbed a super soaker water gun and started sraying her friends on the beach.

Karen Victoria Silvstedt (born 19 September 1974 in Skellefteå, Västerbotten County), is best known as Victoria Silvstedt,, she is a Swedish model, Playboy Playmate of the Year, actress and singer. She is also a radio and TV hostess, a published singer, and a former national-level skier in Sweden. Silvstedt was already well recognized in the United Kingdom when she took on a new career hosting The Late Show on Virgin Radio, and as a guest host on the TV show Eurotrash. She has appeared on the American TV shows Melrose Place and MTV’s The Real World, and she has worked on Italian TV, hosting several shows. She currently co-hosts La Ruota Della Fortuna, the Italian version of Wheel of Fortune on Mediaset's Italia 1, alongside Enrico Papi. As well as its French counterpart, La Roue de La Fortune and Turkish counterpart. She made guest appearances in the Hollywood motion pictures: Boat Trip, The Independent, BASEketball, and Out Cold where she played up to her Swedish-Blonde "Inga" character. Silvstedt is now acting in lead roles in European films mainly based in Italy, and taking to the stage in North America.[3] Silvstedt became a spokesmodel for Guess? Jeans, following in the footsteps of former Guess models, Eva Herzigova, Anna Nicole Smith, and Shana Zadrick. In February 2006 she launched her own lingerie collection during London Fashion Week.[4] As of November 2007 she has been in Italy promoting her new film, Matrimonio alle Bahamas, an Italian comedy starring Massimo Boldi. Silvstedt appears in a reality show centered around her life called My Perfect Life, wh
Storms Media Group is a News Agency specializing in late breaking celebrity News & Images. © 2010 Storms Media Group Inc. All Rights Reserved_Storms Media Group reserves the right to pursue unauthorized users of this image or clip. If you violate our int