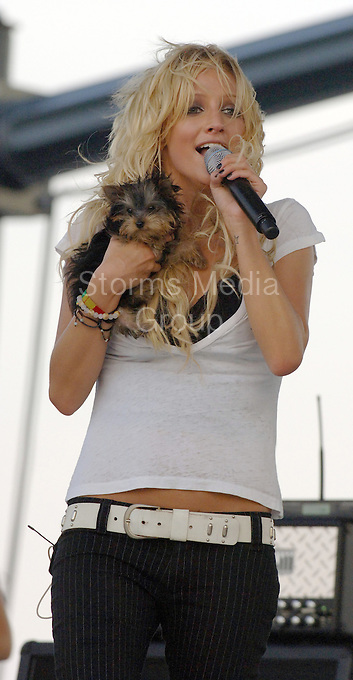 WEST PALM BEACH, FL - MAY 06, 2006: Ashlee Simpson with her new dog Hula rocks SunFest 2006. With her new dog, new blonde extensions, along with a brand new nose (Early on April 21, a source says, Ashlee, 21, arrived at the office of famed Beverly Hills plastic surgeon Dr. Raj Kanodia with her parents, Joe and Tina, for a nose job) It seems younger sis Ashlee's recent nose job makes her look more like her big sis, Jessica. It's the latest move in a makeover that's seen Ashlee go from dark-haired, ratty rocker to sophisticated blonde. Apparently not everyone is happy with Ashlee's new look. It has been reported that Jessica, 25, is furious over Ashlee's apparent quest to morph into her more successful sis.

Ashlee requested that there be no photography at her stage (perhaps to hide her new nose till it fully heals) but that did not keep her fans from capturing her new nose and her new look on film anyway. She looked absolutely radiant at the show as she performed with her new boyfriend, guitar player Braxton Olita. West Palm Beach, Florida. (Photo by Storms Media Group)