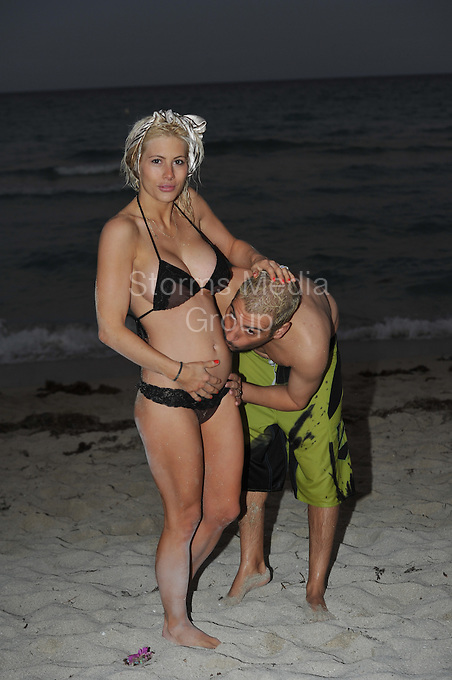 EXCLUSIVE COVERAGE - DO NOT RUN WITH OUT DEAL IN PLACE

SAN CLEMENTE, CA - APRIL 18: (EXCLUSIVE COVERAGE) Shayne and Nik Lamas-Richie celebrate their one-year anniversary on the beach. these are the first known shots of Shayne pregnant. Shayne looked glowing and amazing as she posed for husband Nik with her new baby bump.

Shayne and Nik are currently filming a reality Show. Shayne Dahl Lamas (born November 6, 1985) is an American actress. She is known for her role as the Young Carly Corinthos on General Hospital (2005) and as the winner of the twelfth season of The Bachelor. Lamas is the daughter of Renegade Actor Lorenzo Lamas and Michele Cathy Smith. On April 18, 2010, she married Nik Richie, founder of the popular pseudo-celebrity gossip site TheDirty.com in Las Vegas. The two were married less than 12 hours after meeting, and they confirmed the nuptials on twitter. Following the wedding to Richie, she legally changed her name to Shayne Dahl Lamas-Richie. On April 18, 2011 in San Clemente, California. (Photo By Storms Media Group)