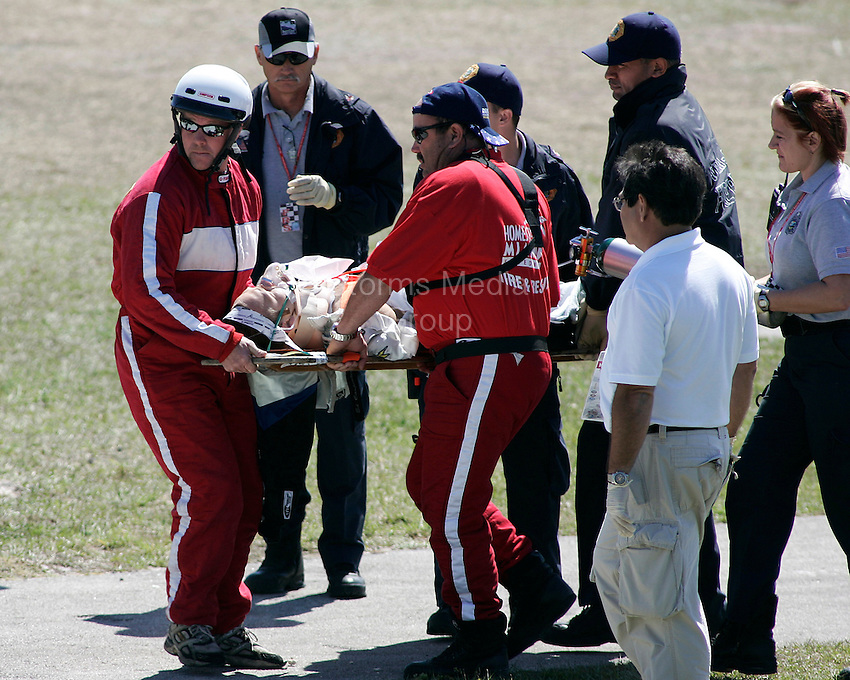 LAS VEGAS, NV - OCTOBER 16: Indianapolis 500 winner Dan Wheldon died Sunday in a fiery 15-car wreck at Las Vegas Motor Speedway when his car flew over another on Lap 13 and smashed into the wall just outside turn 2.

Wheldon was 33. Drivers were told of Wheldon's death in a meeting about two hours after the fiery, smoky crash that many drivers said was the worst they had ever seen.

He won the Indianapolis 500 twice, including this year.

"IndyCar is very sad to announce that Dan Wheldon has passed away from unsurvivable injuries," IndyCar CEO Randy Bernard said. "Our thoughts and prayers are with his family today. IndyCar, its drivers and owners, have decided to end the race. In honor of Dan Wheldon, the drivers have decided to do a five-lap salute to in his honor."

Three other drivers, including championship contender Will Power, were hurt in the pileup.

The wreck left Townsend Bell upside down and smoldering cars and debris littered the track nearly halfway up the straightaway of the 1.5-mile oval.

The track was red-flagged following the accidents while crews worked on fences and removed smashed cars.

Wheldon started in the back of the pack but quickly worked his way through the 34-car field before the wreck.

"It was like a movie scene which they try to make as gnarly as possible," said Danica Patrick, making her final IndyCar start. "It was debris everywhere across the whole track, you could smell the smoke, you could see the billowing smoke on the back straight from the car. There was a chunk of fire that we were driving around. You could see cars scattered.

Drivers had been concerned about the high speeds at the track, where they were hitting nearly 225 mph during practice.

Their concerns became reality when contact on Turn 2 sent cars flying through the air, crashing into each other and into the outside wall and catch fence.

"I'll tell you, I've never seen anything like it," Ryan Briscoe said. "The debris we all had to drive through the lap later, it
Storms Media Group is a News Agency specializing in late breaking celebrity News & Images. © 2014 Storms Media Group Inc. All rights reserved