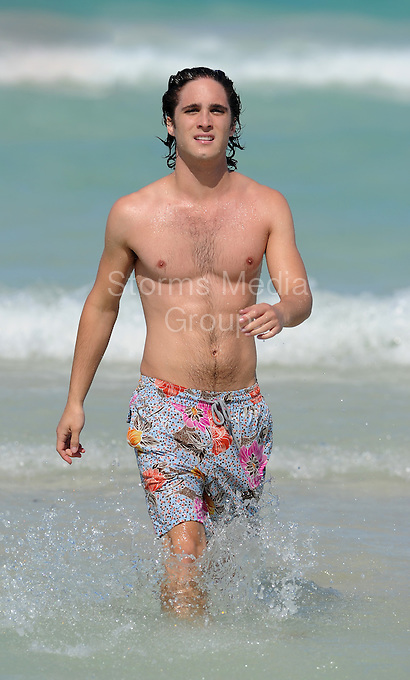 MIAMI BEACH, FL - MAY 24: Diego Boneta studies his Rock Of Ages Script and than takes a swim on Miami Beach with an unidentified woman. Everything was going smooth when a star stuck 12 years old in a purple bathing suit blast on to the scene, trying to get in the pictures and steel the show. (Perhaps the young fan thought we were filming Glee by the look of her dance routine). Diego Andrés González Boneta (born November 29, 1990 in Mexico City) is a Mexican singer and actor. He is best known for playing Rocco in the Mexican soap opera Rebelde and recurring character Javier Luna in the series 90210. He recently recorded his self-titled debut album with his first single, Responde in 2005 and a Brazilian version for the album, with songs in Portuguese was recorded in 2006. At the moment, the album was released in Mexico, Brazil and Chile. He appeared as Alex Santiago in the ABC Family series of Pretty Little Liars as guest star. Boneta landed the role of Drew in Adam Shankman's much anticipated big screen production of 'Rock of Ages' in April 2011. On May 24, 2011 in Miami Beach, Florida. (Photo By Storms Media Group)