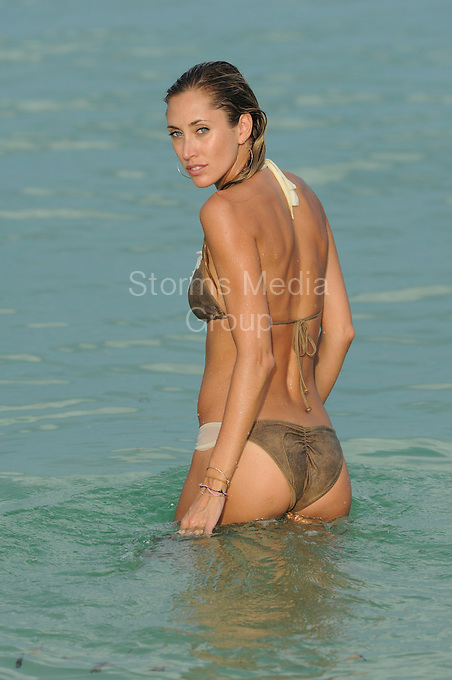 MIAMI BEACH, FL - SEPTEMBER 08: (EXCLUSIVE COVERAGE) Apparently everything Kim Kardashian touches turns to gold. Meet her latest find model-turned reality star Lauren Stoner. The model is best known for appearing on E! Show The Spin Crowd (which is Produced by Kim kardashian who is rumored to have hand pick Lauren for the part). Lauren featured as an 'office hottie' for the Command PR firm, working alongside Jonathan Cheban and Simon Huck, doing public relations for celebrity events and endorsements in New York and LA. Apparently Kardashian is not the only one to have an interest in the stunning 5foot 10inch model. Lauren Stoner was photographed earlier in the week with Transformer director Michael Bay at the beach. All week rumors have been flying as to if this is director Michael bay’s next find. He catapulted Megan Fox and Rosie Huntington-Whiteley into superstardom, and speculation is that maybe Lauren is the next babe to appear in the highly successful Transformers series. Lauren is seen here looking super fit, tone and gorgeous in her Skippy bikini no wonder she got Michael Bays attention, she got our attention, that’s for sure!. On September 8, 2011 in Miami Beach, Florida (Photo By Storms Media Group)