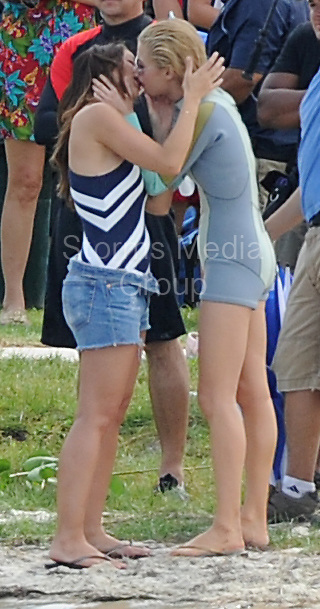 MIAMI BEACH, FL - OCTOBER 04: (EXCLUSIVE COVERAGE) Actress Minka Kelly seems to have gotten over her break up with Yankee captain Derek Jeter. Minka was seen giving Aussie Actress Rachael Taylor a sensual and what appeared to be an "open Mouth" kiss on the lips on the set of the television series 'Charlie's Angels', and it did NOT seem to be part of their script. Minka was touching Rachael's hair and than Minka just grabbed her and kissed her. This took place in front of the entire crew that looked shocked. I guess this was Minka’s version of the Katy Perry song "I Kissed A Girl”. On location at Jungle Island. On October 4, 2011 in Miami Beach, Florida. (Photo By Storms Media Group)