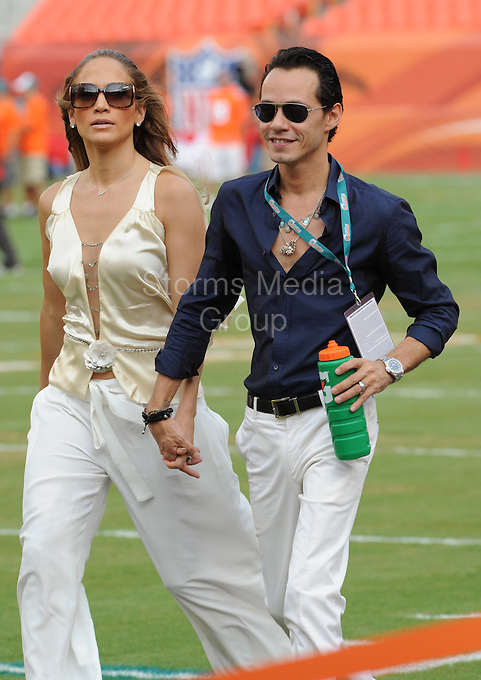 MIAMI BEACH, FL - JULY 16: (Us Weekly) Jenny's back on the singles block. After seven years of marriage, Jennifer Lopez and Marc Anthony have split, their rep tells Us Weekly. "We have decided to end our marriage. This was a very difficult decision. We have come to an amicable conclusion on all matters," they said in a statement. "It is a painful time for all involved, and we appreciate the respect of our privacy at this time. The couple are parents to three-year-old twins Max and Emme. Crooner Anthony, 42, was conspicuously absent at Saturday's star-packed BAFTA Brits to Watch bash in L.A., where wife Lopez, 40, met Prince William and Duchess Kate with mom Guadalupe as her date.
Friends for years, Lopez and Anthony dated briefly in the 1990s. They stepped out again as a couple in early 2004, shortly after Lopez's broken engagement from Ben Affleck, and in the midst of Anthony's divorce from first wife, former Miss Universe Dayanara Torres. They wed at a quiet home wedding in June 2004.
Just last year, they renewed their wedding vows for their sixth anniversary at their Hidden Hills, Calif. estate June 5. "We realized the bets in Vegas [on whether we'd make it] stopped at five years," Anthony joked to Us at the time. And as recently as January, singer, actress and American Idol judge Lopez gushed on the Ellen DeGeneres Show about being a parent with Anthony. "As soon as I had the babies, I thought to myself, 'I want to do this a thousand more times...I love this. This is life."
Anthony and first wife Torres share sons Cristin, 10, and Ryan, 7. Lopez (who famously dated Sean Combs in addition to Affleck), had been married twice before: to restauranteur Ojani Noa (they split in 1998) and former backup dancer Cris Judd, to whom she was married from 2001 to 2003.. On July 16, 2011 in Miami Beach, Florida, (Photo By Storms Media Group)